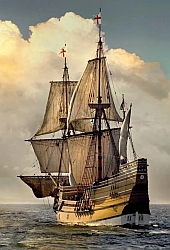 One group of ancestors emigrated to the United States in 1620 as pilgrims on the Mayflower. Through the ancestral line of Bessie Lucille Sherman, we are descended from pilgrims John Alden, his wife Priscilla Mullins (William Mullins), Edward Doty and George Soule. On Dec 20, 2019 my line to Edward Doty was confirmed and accepted by the General Society of Mayflower Descendants, and on Aug 28, 2020 the remaining lines! A proud day for me! This image shows my direct line.

Bessie's 6x great-grandfather, Philip Sherman, arrived in Roxbury, MA as a single man in 1633. He married Sarah Odding a year later. Their son, Edmund, married John Doane's granddaughter, Dorcas Jane Hicks (1652-1712). Imagine my surprise when I realized my husband and I are related. John Doane is his 9th great-grandfather.

The Lorenz story is a sad one. J. A. Henry Lorenz, born in Germany in 1827, emigrated to the US in 1850. A few years later he purchased a brewery in Crawfordsville, IN and married Augusta Reinhard, another German immigrant. Initially it seems he did well for himself, even becoming a city councilman. But in 1868 Augusta died suddenly at the age of 32 while doing laundry. Two years later, Henry walked to the middle of the bridge over the river and jumped to his death. He was 42 years old. Left behind were their five children, ages 2 through 14. It appears his despair was a combination of his wife's death and money problems related to the brewery.

My husband's ancestry is English through and through: John Doane, yeoman and innkeeper, arrived in Plymouth, MA from England in 1630. He later removed to Eastham, MA where he remained until his death. Later, in 1666 at the age of 62, John Perry, II and his wife Johanna Holland arrived from England and settled in Watertown, MA. The ancestry of the wives of their descendants is also English.

The Perry family comes from a long line of religious men. One of those men was Rev. David Brainard Perry, born 1839 in Worcester, MA. He received his theological training from Princeton and Yale universities. In 1872 he worked as the sole instructor at the newly formed Doane College in Crete, Nebraska. Four years later he married the founder's daughter, Helen Doane. In 1888, David became the first president of Doane College.

David's son, Charles Boswell Perry, was the US British Deputy Consul General from 1907 - 1916. During this time he lived in Turin, Italy and Bombay and Calcutta, India. He retired from service and made London his permanent home where he married Irishwoman Mary Jane Kathleen "Mai-Mai" Wilson. Charles contracted tuberculosis and died at a sanitarium in Roquebrune-Cap-Martin, France at the age of 44. Mai-Mai and their three children emigrated to the United States shortly thereafter.

Everyone's family has at least one skeleton in the closet. My guess is that ours was my grandmother's half-brother William Eugene McCown, a gay man who lived from 1898 until 1966. I didn't find this out until after my grandma died so I have no way of knowing if his family knew or suspected but it doesn't matter. For awhile, William led what appeared to be an exciting life in Paris, France during the roaring '20s!

After finishing college, Eugene (the name he preferred) traveled to Paris in 1921 where he was "an artist by day and a jazz pianist at Le Bœuf by night". It appears he had many friends and lovers while in Paris and we know he was friends with a few of the minor celebrities of the day. But this was the time of Picasso, Hemmingway, Cocteau, Dali and more. Did he meet these famous personalities? We'll never know but it's fun to imagine what it could have been like.

Eugene remained in Paris for the next nine years before returning to New York City. Sadly, in 1966 he tried to commit suicide by ingesting a number of pills and alcohol. He was found on the floor the next day by a friend of his, Gabriel Oriol, who took him to the hospital where Eugene died a month later from pneumonia.

Examples of his artwork and other source documents can be found in the Media link under the Individual tab on his person page.

A unique look into the daily lives of two of our distant cousins: Simeon, son of Nathan Sherman and Lucy Leonard (my 3x great-grandparents), and his wife Emma, daughter of Oliver Field and Agnes Randall...

Putting Faces to the Names

I strive to document all of the sources in this family tree. If you have something to add, please let me know.